“I’ve never seen a more terrifying film than  THE BABADOOK. It will scare the hell out of you as it did me.” – William Friedkin. The twitter quote from the director of  The Exorcist  says it all.  The Babadook  from Australian writer/director Jennifer Kent provides horror fans one of the more intelligent fright films of recent years. The grue-crew are here to share their thoughts about the film you should see!

Dave  shares  the horror news of the week with news about  Star Wars VII The Force Awakens,  Jurassic World  and  Paranormal Activity 5. The fifth season of  The Walking Dead  reaches its mid-season finale with a shocking and emotional ending driving  the show to a heated discussion.

Co-hosts  Doc Rotten,  Santos (The Black Saint) Ellin Jr.,  Dave Dreher,  Thomas Mariani and Vixen, the voice of reason, are back again this week to give you the best in horror as they recap, review and obliterate all that is horror this week! All this and Stump the Saint too! It’s a perfect world.

A layered and complex character study, The Babadook is one of the more engrossing and creep-tastic horror films of the festival season and one that should not be missed. Join Doc, The Black Saint, Dave, Thomas and Vixen dive into spoilers as they discuss the various ways you can approach the film from a straight up monster film to an incredibly intelligent psychological drama. 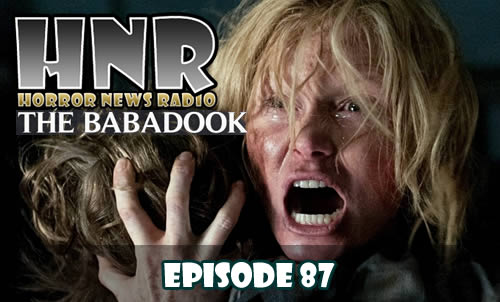 What Have You Been Watching:  The Walking Dead Season 5 Mid-season Finale

In the mid-season finale, Rick, Daryl and the gang are out to save Carol and Beth from a misguided group of survivors held up in an Atlanta hospital. As the show’s ending draws to a close, a series regular meets their demise; jaws drop and tears fly. How will the HNR crew react? Is the show living up the improved first episodes of this season? Where will the show go from here?

Dave returns to bring you  the Horror News of the Week with news of  AMC causing a stir on Facebook when they unintentionally spoil the ending of  The Walking Dead  mid-season finale  for the West Coast viewers minutes after the show ended on the East Coast. What were they thinking? Happy Thanksgiving as movie fans are treated to teaser trailers for both  Jurassic World  and  Star Wars VII Th Force Awakens.  Marcus Nispel returns with a long gestating film called  Backmask. The producers of  Paranormal Activity 5  announce that the film will be in glorious 3D. HNR favorite Kevin Bacon joins director Greg McLean (Wolf Creek) for a film called  Jungle.

https://traffic.libsyn.com/secure/docrotten/DoHTCE-104-AttackOfTheCrabMonsters-2.mp3Podcast (dohclassic): Play in new window | Download (Duration: 1:09:30 — 32.0MB)Subscribe: RSS“So you have wounded me. I must grow a new claw. Well, good, for I could do it […]