“Suzy, do you know anything about … witches?” Suzy Bannion doesn’t know much, but she’s about to find out a lot more, … the hard way! As of the recording of this podcast, it’s just 12 days past the 40th anniversary of the U.S. release of Dario Argento’s Suspiria, a Giallo masterpiece. Doc Rotten is still on hiatus, diligently working on the next issues of the Gruesome Magazine quarterly print and electronic editions. (Issue #2 is now available. Don’t miss out!) In the interim, your regular hosts, The Black Saint and Jeff Mohr, are joined by the capable and knowledgeable Bill Mulligan, film director, and Chad Hunt, comic book artist/writer and co-host of Decades of Horror: The Classic Era podcast. Join them as they are completely entranced by the magic of Argento’s audio and visual feast.

Suspiria is the story of an elite dance school in Germany that is a front for some supernatural shenanigans. The school is run by Madame Blanc (Joan Bennett), and its head instructor is the disciplinary Miss Tanner (Alida Valli). Suzy (Jessica Harper) is a young American who has recently arrived at the school. Life at the school is a dreamlike, nightmarish experience. Suzy’s life there is soon rocked by the brutal murders of two fellow students, Pat (Eva AxÃ©n) and Sara (Stefania Casini), and the school’s blind piano player, Daniel (Flavio Bucci).

Co-written (with Daria Nicolodi) and directed by Dario Argento, the film’s plot is a train wreck. Luciano Tovoli’s cinematography and the Goblin’s score, however, are so masterful, no one seems to care that exactly what happens or why it happens is never made clear.

The Black Saint and Bill Mulligan extol the effect the trailer had on them when they first saw it. Think involuntary bodily evacuation. The crew all think Suspiria is Jessica Harper’s film more than any other member of the cast. When they learn she got the part after Argento saw her performance in Brian de Palma’s Phantom of the Paradise, they throw some smack toward award-winning director and fellow Decades of Horror co-host, Christopher G. Moore (See Decades of Horror 1970s – Episode 40 – Phantom of the Paradise (1974)). Suspiria is filled with effective and memorable scenes that our fearless Grue Crew discuss in detail, especially the sequences that detailing the first murder, the razor wire girl, and the return of razor wire girl (more bodily evacuation). They also remark on the film’s omnipresent vivid and often inappropriate-to-life colors.

Find out that what Disney film The Black Saint has never seen. (What?!) Or hear The Black Saint’s story about meeting Dario Argento. Or find out why much of the time, the dancers’ behaviors seem juvenile. 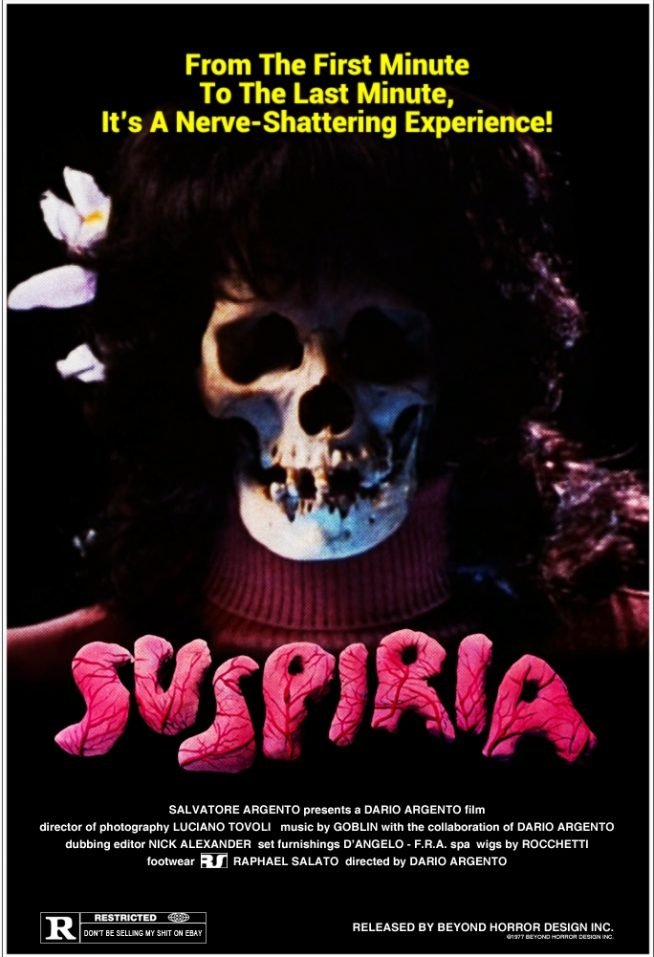