“Sleep all day. Party all night. Never grow old. Never die. It’s fun to be a vampire.” The tag-line for The Lost Boys (1987) captures the “Peter Pan” spirit of this classic Eighties vampire tale, romanticizing the creatures in an approachable and thrilling young adult spin without sacrificing the horror and the thrills. No sparkles here, folks!  Josh  Schafer joins Doc Rotten and Christopher G. Moore to revisit the film that solidified  Joel Schumacher as a directing talent…well, at least until bat-nipples did him in.

Released in 1987, The Lost Boys introduced horror fans to a variety of iconic horror flash and style rarely matched in this day-and-age. This is the first film to provide fans with the “Two-Coreys” teaming Corey Haim and Corey Feldman together – even though Feldman has  Jamison Newlander and Frog Brothers wingman. Keifer Sutherland makes a striking impression as David, the blonde leader of the gothic punk vampires and Jason Patric (son of Exorcist star Jason Miller) emo-acts his way into every young girl’s heart. And, above all, we have shirtless, oiled  Timmy Cappello belting out “I Still Beleive” – what else do you need.

Christopher G. Moore,  Doc Rotten, and guest-host Josh  Schafer from Lunchmeat VHS gather to take a look at  The Lost Boys  perhaps one of the best and most influential vampire movies of the Eighties. The Grue-Crew debate the merit of director  Joel Schumacher and whether Grampa was a werewolf in an alternate “Mandela  Effect” universe. It’s all about the style, the clothes, the stars, and the songs; The Lost Boys holds up well after 30+ years and the Grue-Crew reflect on it all. “One thing about living in Santa Carla I never could stomach; all the damn vampires.”

A mother and her two sons move to a small coast town in California. The town is plagued by bikers and some mysterious deaths. The younger boy makes friends with two other boys who claim to be vampire hunters while the older boy is drawn into the gang of bikers by a beautiful girl. The older boy starts sleeping days and staying out all night while the younger boy starts getting into trouble because of his friends’ obsession. 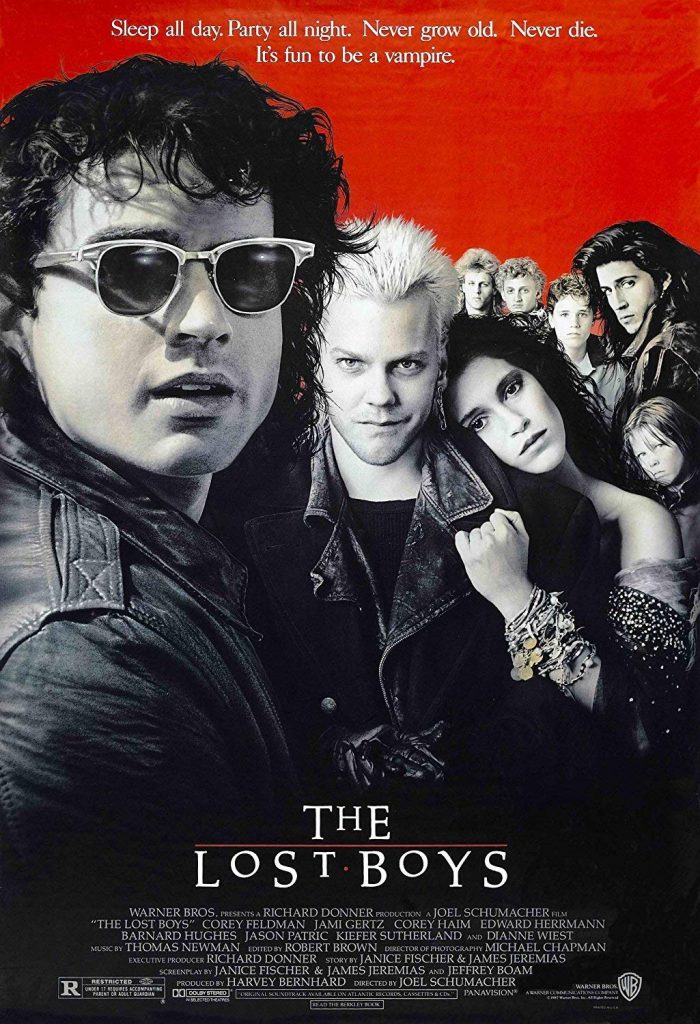