“Once it gets inside you, it will do anything to get out!” the tagline for Parasite 3-D .promised buckets of 3-D gruesome gore. The film partially delivers with Stan Winston creature effects that hold up and the presence of a young Demi Moore. And, then there is the 3-D, effective and restrained, not as over-the-top as later films or the previous Comin’ At You. Christopher G. Moore is joined by co-host, Doc Rotten to discuss a Charles Band classic seen in its original 3-D presentation at the Carolina Theater in Durham, North Carolina..

On Horror News Radio, week after week, as the Grue-Crew mentioned the upcoming Splatterflix Film Series, Christopher shared his memories of seeing stills from Parasite in Fangoria, specifically the shot of a victim with a hollow pipe sticking out of his chest with blood dripping out the far end. Each week, we would eagerly announce that Parasite would be showing at the event. To see Parasite in 3-D would certainly be amazing. On Saturday, October 13, 2018, Christopher is finally able to see this scene on the big screen…and in its original 3-D presentation thanks to Jim Carl, from the Carolina Theater and Harry Guerro, from Exhumed Films. Finally, all is right in the world.

But, let’s not forget this is a Charles Band film. Despite his reputation, Parasite proves there is more to the low-budget legendary director than mere schlock and exploitation…well, yes, there remains plenty of that too; but…the film holds up remarkably well. This is mostly due to the terrific early effects work from Stan Winston, a quick plot, and retro-fueled fascination in its 80s 3-D work. While not a masterpiece by any stretch of the imagination, it may be better than the discouraging reviews heaped upon the film during its release. Christopher and Doc take a look at the film, the cast, the director, the 3-D, and the Parasite creature itself this week. It’s in 3-D, so you know Doc is happy. Ha! Take a listen, and you may be convinced to give the film a second chance…maybe.

Paul Dean has created a deadly parasite that is now attached to his stomach. He and his female companion, Patricia Welles, must find a way to destroy it while also trying to avoid Ricus, his rednecks, and an evil government agent named Merchant. 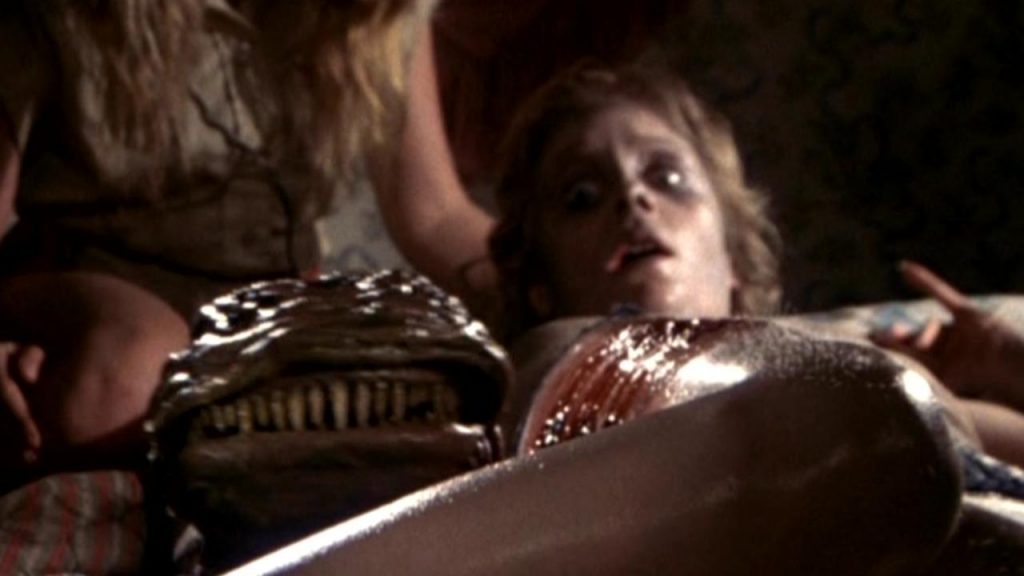 http://traffic.libsyn.com/docrotten/DoH_TCE_19_Santo_and_Blue_Demon_Against_the_Monsters_20170924.mp3Podcast (dohclassic): Play in new window | Download (Duration: 1:23:45 — 38.6MB)Subscribe: RSS“The day I died, I swore I would get my revenge!” Join the Decades of Horror: The Classic Era crew for this episode — Erin Miskell, Chad Hunt, Joseph Perry, Jeff Mohr, and special guest Mike Imboden — as we wrestle with Santo […]

http://traffic.libsyn.com/docrotten/DoH_TCE_24_Invasion_of_the_Body_Snatchers_20171203.mp3Podcast (dohclassic): Play in new window | Download (Duration: 1:27:50 — 40.5MB)Subscribe: RSS“I’ve been afraid a lot of times in my life. But I didn’t know the real meaning of fear until… until I had kissed Becky.” Have you ever kissed someone and realized they weren’t who they were? That’s the horror Miles Bennell is […]

https://traffic.libsyn.com/secure/docrotten/DOH70s-133-Shock-Review.mp3Podcast: Play in new window | Download (Duration: 1:14:48 — 43.0MB)Subscribe: RSS“Marco!” How many of you responded with, “Polo?” Join your faithful Grue Crew – Doc Rotten, Chad Hunt, Bill Mulligan, and Jeff Mohr – as they have a nice visit with Mario Bava and Daria Nicolodi in Shock (1977), where nobody says, “Polo.” Decades […]