Into the Storm  (2014)  blows into theaters this weekend and the grue-crew is here to review this disaster…uh…disaster film. The movie  is full of CGI effects providing a variety of tornado visuals and storm fueled action and destruction – it is all spectacle, baby, yeah.

Dave  shares  the horror news of the week with the sad announcement of the passing of  Marilyn Burns, Menahem Golan and Robin Williams as the crew share fond memories of their film careers and influence. Joseph Perry returns this week with more details from PiFan, a fantasy film fest from South Korea.

Co-hosts  Doc Rotten,  Santos (The Black Saint) Ellin Jr.,  Dave Dreher,  Thomas Mariani and Vixen, the voice of reason, are back again this week to give you the best in horror as they recap, review and obliterate all that is horror this week!  This week we announce that it is  time to enter for a chance to win Anchor Bay’s  The Walking Dead Season 4 Blu-Ray.

Into the Storm  (2014)
Director  Steven Quale (Final Destination 5) returns to direct Into the Storm which is a blend of  found footage, traditional disaster flick and a family drama that wears its similarities with Twister on its sleeve. Even Santos catches the direct reference to the Nineties classic as a giant artificial cow flies by. “We’ve got cows!” The grue-crew dive into the film tearing it a new one for its weak script while praising the special effects and its dumb-fun pacing. 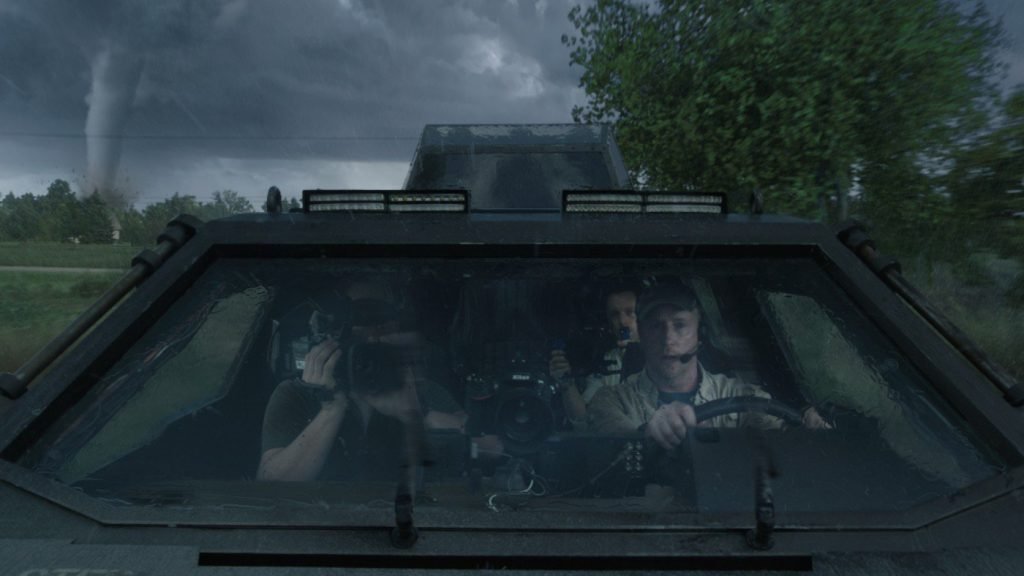 What Have You Been Watching:  PiFan 2014 report from Joseph Perry
The  Puchon International Fantastic Film Festival is a popular annual event in  South Korea. Joining us from the festival floor is HNR fan turned man-on-the-street reported, Joseph Perry discussing three more films: Lemon Tree Passage from Australia; Chimeras from Switzerland/Spain; and, Housebound from New Zealand.

Horror News of the Week for 08/11/2014
Dave Dreher  shares the Horror News of the Week beginning with news of the loss of actress Marilyn Burns (Texas Chainsaw Massacre – 1974) and producer Menahem Golan. The grue-crew also react to the news of the death of comedian-actor Robin Williams. Dave tries to lighten the somber tone  with a report on the Robert Englund appearing as Freddy event this past weekend followed by the announcement that Eli Roth’s The Green Inferno has been pulled completely off the release schedule. Grrrrr. Next up is news that  Seth Grahame-Smith is releasing a follow up to his hit historical horror novel Abraham Lincoln Vampire Hunter early next year titled The Last American Vampire. Finally Dave sends Santos into a tizzy with news of the trailer for It Grows!

Contest: Anchor Bay Blu-Ray  giveaway of The Walking Dead Season 4
The Black Saint provides the trivia question for Anchor Bay’s Blu-Ray  giveaway of  The Walking Dead Season 4  coming out August 26, 2014. Anchor Bay is teaming up with Horror News Radio to give away two copies of the blu-ray release. Check out  http://horrornewsradio.com/trivia-thewalkingdead  for details. Contest ends midnight, August 24, 2014 and is open to US residents only. Good luck!

https://traffic.libsyn.com/secure/docrotten/DOH70s-143-AssignmentTerror-Review.mp3Podcast: Play in new window | Download (Duration: 54:39 — 31.5MB)Subscribe: RSS“For a few coins I will hypnotize you and I will read your future in your sleepy eyes.” Sleepy […]