The Amazing Spider-Man 2  swings into the top box office spot this weekend with Marc Webb directing and Andrew Garfield starring as Peter Parker/Spider-Man. The film introduces Harry Osborn as the Green Goblin (Dane DeHaan), Max Dillon as Electro (Jamie Foxx) and  Aleksei Sytsevich as The Rhino (Paul Giamatti). Is this shades of Batman and Robin syndrome? Say it isn’t so!

Dave ramps up the news of the week with bits about  Halloween 3, Dan Curtis’  Dracula  with Jack Palance and the epic battle promised in the upcoming American-ized  Godzilla  film.

The Amazing Spider-Man 2 (2014)
Our favorite wall crawler returns in  The Amazing Spider-Man 2  bringing with him Electro, The Green Goblin and The Rhino. To some this is all a big bag of nonsense, for others it is an emotional roller-coaster focusing on the story of Peter Parker and Gwen Stacy. Some of it works. Some of it fails miserably. The grue-crew has strong opinions on it, ‘Nuff Said. 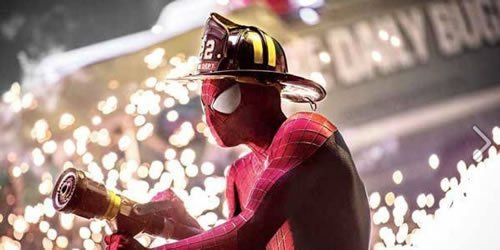 Horror News of the Week for 05/05/2014
Dave Dreher  shares the Horror News of the Week beginning with news of  Halloween 3  which may or may not be in 3D. Stephen King fans are all excited about the promo for his next novel  Mr. Mercedes. Was that Pennywise? Not many horror fans are aware that horror great Dan Curtis produced and directed a televised version of  Dracula  starring Jack Palance. The film is getting a Blu-Ray release. More  Godzilla  news building up to a battle of kaiju monsters. Finally, the WGN television show  Salem  is getting renewed and Doc has something to say about this!

Anchor Bay Entertainment Blu-Ray Giveaway – Mr. Jones (2014)
Horror News Radio is teaming up with  Anchor Bay Entertainment  to provide a killer DVD giveaway for their film  Mr. Jones  (2014) from director  Karl Mueller featuring Sarah Jones and Jon Foster. The film launches May 6, 2014 on VOD and Blu-Ray.  Entries will be accepted until Midnight (Eastern Standard Time), May 11, 2014. All you need to do is complete the The Black Saint’s HNR Horror Trivia Question at this address:  http://horrornewsradio.com/trivia-mrjones. The Blu-Ray giveaway is open to US addresses only