The Quiet Ones  ushers the return of Hammer Films to the theaters after the success of their last film  The Woman in Black. Doc and Santos dig the Seventies feels and Vixen returns to share her thoughts on the first horror film she has seen where she did not have to cover her eyes. Yeah, there is some debate on how scary it actually is. Sigh.

Doc discusses the slasher film  Camp Dread  in this week’s What Have You Been Watching segment while Dave checks in with the Horror News of the Week with news about  Friday the 13th  and  Penny Dreadful.

The Quiet Ones (2014)
What the heck happened? A great idea and a great cast squandered for a mediocre horror film – although  The Quiet Ones  is a tight, entertaining little thriller. The scares are forced and few and far between but the acting is terrific with Jared Harris and Olivia Cooke getting most of the recognition. But what happened to the scares? Listen to the grue-crew investigate during the podcast to find out. 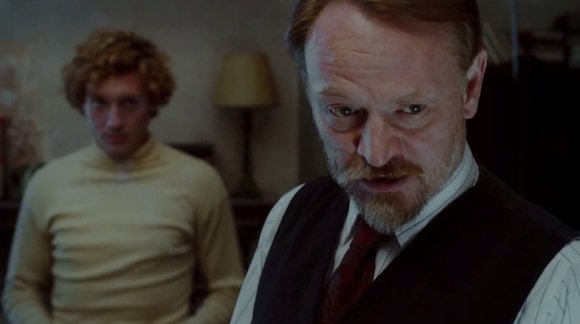 Horror News of the Week for 04/28/2014
Dave Dreher  shares the Horror News of the Week beginning with his favorite horror icon making it to serial television, Jason Voorhees with a  Friday the 13th  show. The trailer for  As Above, So Below  may have been the scariest thing about  The Quiet Ones  – d’oh.  Kevin Smith returns to horror with his  Tusk  cast in tow to create  Anti-Claus, as holiday horror anthology. Maybe. Santos nearly throws up with the disclaimer that Universal’s  Dracula Untold  described as a “family fantasy film.” Oh, dear. Showtime is presenting the first episode of their horror show  Penny Dreadful  a full month ahead of its premiere date.

Anchor Bay Entertainment Blu-Ray Giveaway – Mr. Jones (2014)
Horror News Radio is teaming up with  Anchor Bay Entertainment  to provide a killer DVD giveaway for their film  Mr. Jones  (2014) from director  Karl Mueller featuring Sarah Jones and Jon Foster. The film launches May 6, 2014 on VOD and Blu-Ray.  Entries will be accepted until Midnight (Eastern Standard Time), May 11, 2014. All you need to do is complete the The Black Saint’s HNR Horror Trivia Question at this address:  http://horrornewsradio.com/trivia-mrjones. The DVD giveaway is open to US addresses only

Anchor Bay Entertainment DVD Giveaway – Death Do Us Part (2014) – Winners Announced
Horror News Radio is teaming up with  Anchor Bay Entertainment  to provide a killer DVD giveaway for their film  Death Do Us Part  (2014) from director Nicholas Humphries featuring Kennedy Jamieson and Ryan Harris. The film launches April 15, 2014 on VOD and DVD. We have two (2) winners randomly selected: congratulations to  Mick St. John  from St Louis, MO and  Jesse Percy  from Alliance, OH.