“The Hands of Jack the Ripper Live Again…As His Fiendish Daughter Kills Again…And Again…And Again…” Time for another Hammer Films production from the 1970s! Join your faithful Grue Crew — Doc Rotten, Chad Hunt, Bill Mulligan, and Jeff Mohr — as they tear (notice I didn’t use “rip”) into  Hands of the Ripper  (1971).

This somewhat lesser-known Hammer film is directed by  Peter Sasdy  and written by  Lewis Davidson  from a story by Edward Spencer Shew.  Hands of the Ripper  tells the story of Anna (Angharad Rees) who is Jack the Ripper’s daughter, and Dr. Pritchard (Eric Porter) who thinks he can save Anna from the family curse. You see, when Anna was a toddler, she witnessed the death of her mother at the hands of dear old Dad. Now, as a young woman, she seems to be carrying on her father’s work, but is it the result of psychological trauma or is she possessed by her father’s murderous soul? As Pritchard searches for the answer, the body count rises.

Without Peter Cushing or Christopher Lee, Hammer’s frequent headliners,  Hands of the Ripper  was bound to receive less attention than films featuring one or both of them. The cast, however, does an excellent job. Rees and Porter are supported by  Jane Merrow, Pritchard’s son’s blind fiance Laura; Derek Godfrey as Dysart, a character despicable in all aspects;  Dora Bryan  as Mrs. Golding, a fake psychic; Margaret Rawlings as Madame Bullard, a real psychic; Marjie Lawrence as Dolly, Pritchard’s housemaid;  Keith Bell  as Pritchard’s son; and  Lynda Baron  as Long Liz, a local prostitute,.

Despite not featuring Frankenstein or Dracula,  Hands of the Ripper  is a worthy addition to the canon of Hammer Films. Jeff is intrigued by the killer’s innovative use of everyday items to stab their victims. This one has long been a favorite of Doc’s and he points out the use of the Baker Street set at Pinewood Studios and how it added to the atmosphere and tone of the film. As an aficionado of Ripper lore, Chad thinks this story has a unique take and notices that Long Liz, one of the real Jack the Ripper’s victims, is used as the name of a character in this film. Bill ponders whether the killer suffers from some psychological or supernatural influences and ranks this film squarely in the middle of the pack as Hammer films go. Even though the story lays its cards on the table very early, the Decades of Horror 1970s Grue Crew think  The Hands of the Ripper  is absolutely worth a watch. 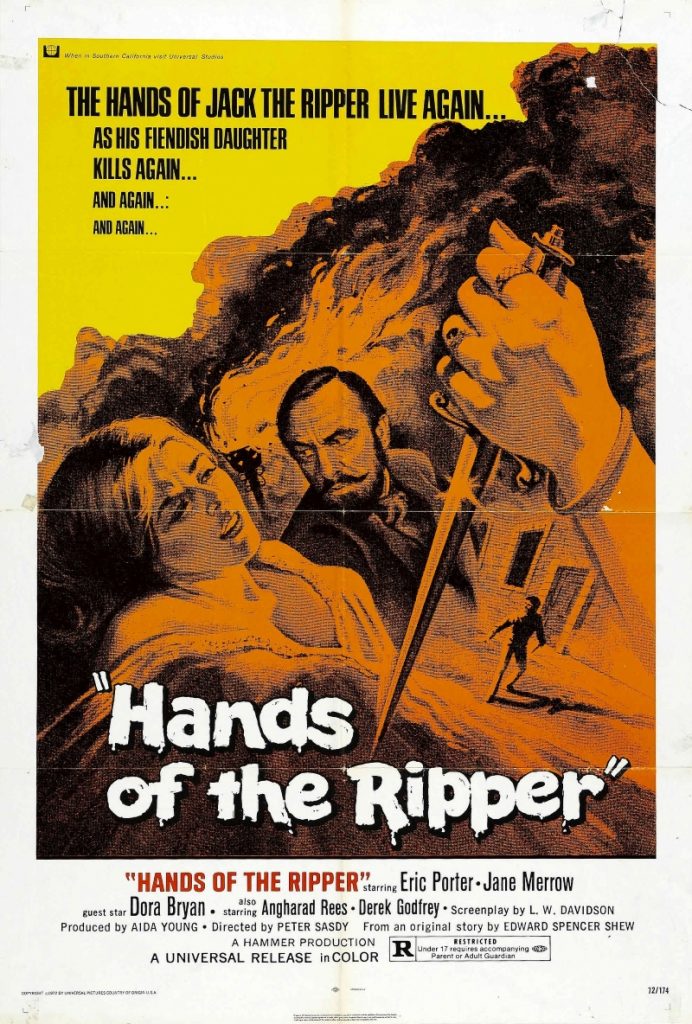