“Du muÃŸt Caligari werden! You must become Caligari!” Join the Decades of Horror: The Classic Era’s Grue Crew – Chad Hunt, Erin Miskell, Jeff Mohr, and Joseph Perry – as we attempt the cinematic version of Volkswagen stuffing, climbing into The Cabinet of Dr. Caligari together and locking the door behind us. We are a rather close group.

Sometimes referred to as the first horror film, The Cabinet of Dr. Caligari is also a crown jewel of German expressionism. Producer Erich Pommer (Metropolis, Faust) put together a crew that included production designer Walter Reimann, who gave the film its unique and unsettling look. Directed by Robert Wiene (The Hands of Orlac), the film tells the story of Dr. Caligari (Werner Krauss), a sideshow mesmerist, and his somnambulist Cesare (Conrad Veidt). Dr. Caligari uses his power over Cesare not only for sideshow performances, but to commit murders. Alan (Hans Heinrich von Twardowski), one of their early victims, is close friends with Francis (Friedrich FehÃ©r) and Jane (Lil Dagover). After Alan’s murder, Francis becomes obsessed with exposing Caligari’s evil deeds while Jane begins to fall under Caligari’s spell.

The Cabinet of Dr. Caligari is not, however, simply a slasher film.  The writers, Carl Mayer (The Haunted Castle, The Last Laugh) and Hans Janowitz (Der Januskopf), use personal experiences as the story’s foundation while interweaving several layers, leaving interpretation to the viewer.

Listen as we discuss the answers to these questions: What is German expressionism? How did this moment in German history influence the film? Who faked insanity to get out of military service in WWI? Who was known as a Nazi sympathizer in later years? Who was strongly anti-Nazi? Who was one of Hitler’s favorite actors? To which famous director was the film first offered? How does the framing story change the film’s message? What should you do if you don’t like the score? How does The Cabinet of Dr. Caligari relate to the Batman TV-series of the 1960s (as all films must)?  What does the Babadook have to do with Dr. Caligari?

As always, if you’re paying attention, you’ll also hear which of us makes these comments:

We plan to release a new episode every other week. Our upcoming and very flexible schedule includes Bride of Frankenstein (1935), Invasion of the Body Snatchers (1956), JÃ» jin yuki otoko (the original 1955 Japanese version, aka Half Human), and House on Haunted Hill (1959). 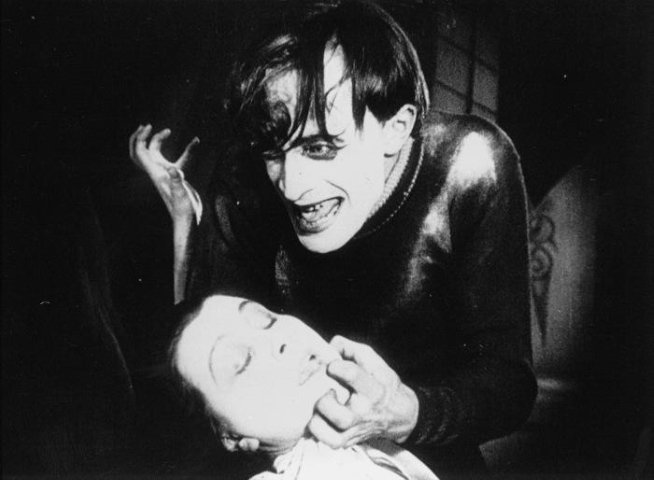