Tusk  (2014)  is Kevin’s Smith second horror comedy with the script germinating from the SModcast podcast: episode  259 The Walrus and The Carpenter. The film may be a bit uneven and controversial but the performance by Michael Parks as Howard Howe has a number of the grue-crew saying he should be considered for an Academy Award…but realize, sadly, it never will.

Dave shares  the horror news of the week  with news of Universal hiring  Noah Hawley (Fargo) to script a Classic Monster flick and  Camille Keaton returns for a sequel to  I Spit On Your Grave. Doc, Thomas and Santos have all seen  The Maze Runner…and they like it. What?

Co-hosts  Doc Rotten,  Santos (The Black Saint) Ellin Jr.,  Dave Dreher,  Thomas Mariani and Vixen, the voice of reason, are back again this week to give you the best in horror as they recap, review and obliterate all that is horror this week!  This week we announce that it is  time to enter for a chance to win Lionsgate Home  Entertainments’s  Hannibal Season 2 DVD  giveaway prize pack.

Tusk  (2014)
Kevin Smith turns a dare on his popular podcast into a full length feature, Tusk. The film stars Justin Long,  Michael Parks, Genesis Rodriguez and Haley Joel Osment where Parks’ Howard Howe eyes Justin Long’s  Wallace Bryton for his horrifying experiments in turning a man into a walrus, a new Mr. Tusk. The reviews are mixed among the grue-crew, Santos loves the films while Vixen shares she was prepared to walk out of the theater. It’s a lively conversation with a personal call to action for Kevin Smith from Thomas.

What Have You Been  Watching:  The Maze Runner
Yes, The Maze Runner is an adaptation of a Young Adult novel, but it is well done, thrilling and features creepy creature effects with the Grievers. Doc Rotten, The Black Saint and Thomas Mariani each saw the film over the weekend and recap the highlights of the film, including some crafty eyebrow acting. Woot!

Horror News of the Week for 09/22/2014
Dave  begins the Horror News of the Week with the announcement that  Noah Hawley from the Fargo TV series has been hired to write the next film for the revamped Universal Monsters film series. Which monster he is writing has not yet been revealed. It appears that infamous director Ed Woods was also a writer of prose…and his 32 stories  have been collected into a single volume. Camille Keaton returns for a sequel to  I Spit On Your Grave.  Hulu lands J.J. Abrams adaptation of Stephen King’s  11/22/63. And Spirit stores spread Halloween cheer to children.

Contest: Lionsgate Home Entertainment DVD  giveaway of Hannibal Season 2.
The Black Saint provides the trivia question for Lionsgate Home Entertainment’s DVD  giveaway of  Hannibal Season 2  out  now. Thank to The Black Saint,  Horror News Radio as a copy to give away. Check out  http://horrornewsradio.com/trivia-hannibal  for details. Contest ends midnight, September 28, 2014 and is open to US residents only. Good luck! 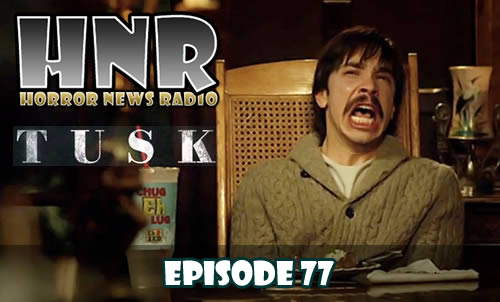 https://traffic.libsyn.com/secure/docrotten/DoH70s-156-GIRLY-20211227.mp3Podcast: Play in new window | Download (Duration: 1:12:32 — 33.4MB)Subscribe: RSS“It’s elevens. Tens are for booties.” Shouldn’t that go without saying? Join your faithful Grue Crew – Doc Rotten, Chad Hunt, Bill Mulligan, Daphne Monary-Ernsdorff, and Jeff Mohr – as they cozy up to a film director Freddie Francis calls his favorite, which was […]

The Hobbit: The Battle of the Five Armies – Episode 90 – Horror News Radio

Peter Jackson is finally done with his Middle Earth epic series of films with  The Hobbit: Battle of the Five Armies  as the adaptation of The Hobbit from  J. R. R. Tolkien. For horror fans, keep on the look out for another appearance of horror legend Christopher Lee. The HNR crew chime in with widely […]

http://traffic.libsyn.com/docrotten/DOH_70s_Eps053_Willard.mp3Podcast: Play in new window | Download (Duration: 1:09:01 — 31.6MB)Subscribe: RSS“Tear Him Up!” – The quote from  Willard  (1976) signals the beginning of the best scene in the film where Ernest Borgnine is attacked by hundreds of rats. It’s a great  scene. Meanwhile, Bruce Davidson watches on. Let the fun begin! The Black Saint […]